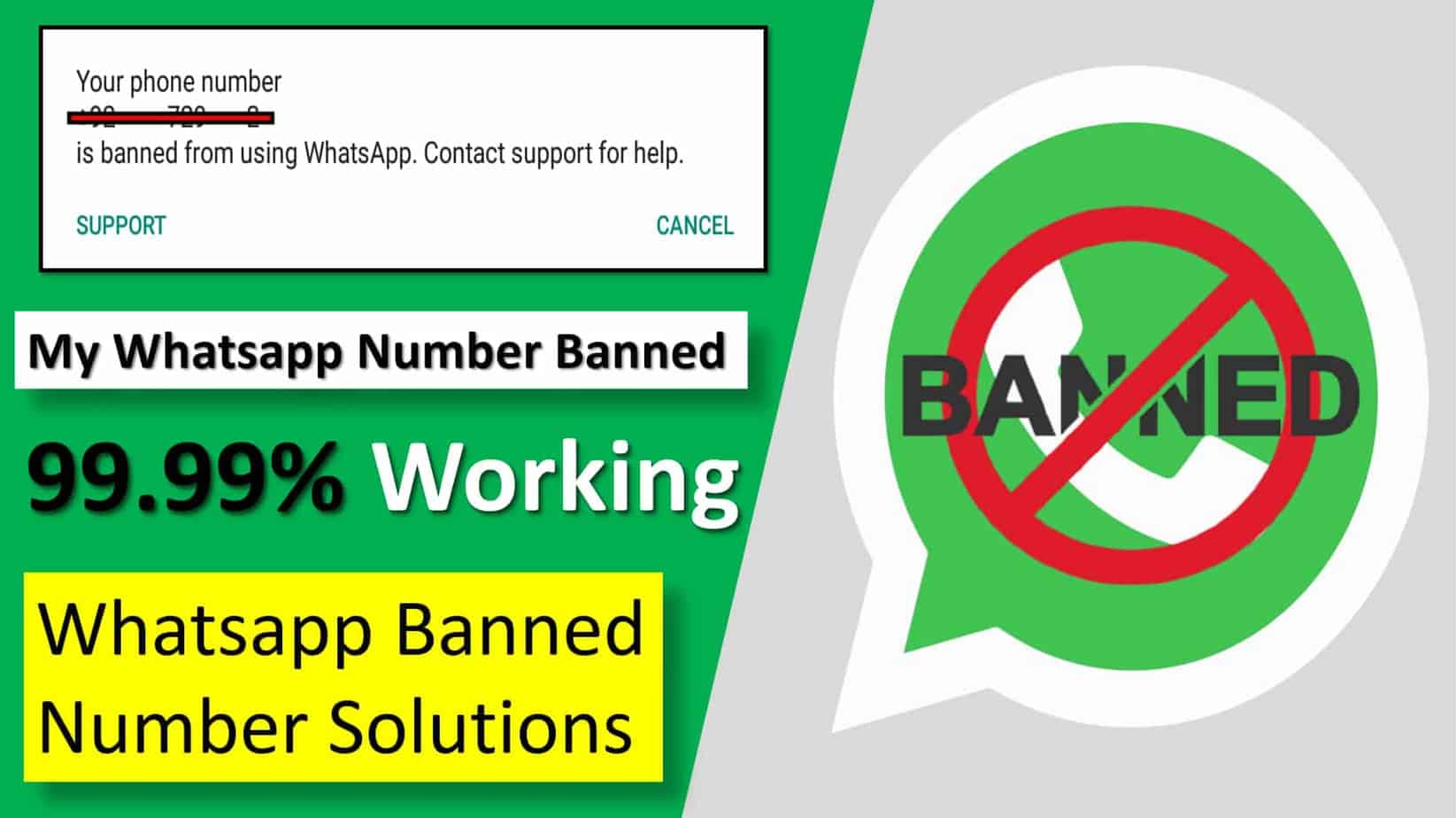 Whatsapp Banned Number Solution 2023: Here is a guide on how to activate the banned WhatsApp number in 2023.

Welcome to TricksFly, you haven’t been able to access WhatsApp for a few days now? Your account seems to be locked for some reason and you do not know how to restore it.

Don’t despair, there is still hope.

With a little luck, you might be able to remove this block and regain access to your conversations with friends.

If you receive this type of message, it means that you are not allowed to use WhatsApp.

But don’t worry, this guide covers everything you need to know about how to activate a banned WhatsApp account in 2023.

Of course, WhatsApp is a popular app that is being used by billions of users around the world. The free messaging platform is used to send messages, and make audio and video calls, and is used by 300 million users daily.

However, many users do not realize that the app has certain ‘Terms of Service, which they may fail to follow, which may result in temporary or permanent suspension of accounts. Nevertheless, steps can be taken to lift the ban.

What is a Banned Whatsapp Number?

Accounts that are banned receive the following messages on whatsapp: “Your phone number is banned from using Whatsapp. Contact support for help.” Normally the whatsapp does not issue a warning before banning an account. Usually, a temporary ban is indicated with a timer indicating the length of the ban, and a permanent ban is only for contacting support.

WhatsApp is the most popular instant messaging service and one of the most downloaded apps on Android and iOS devices. WhatsApp’s huge user base has created many fake versions of WhatsApp. This modern version of WhatsApp has features that are lacking in traditional WhatsApp through Facebook. The additional features offered by the modified version of WA make it a very popular alternative to the traditional app. Forked versions work just like normal WA, which allows you to send messages to any number.

That means you don’t have to worry about whether the person you’re sending the message to is a mode version of WhatsApp. Although the features offered by the modern version of WA are very attractive and powerful. But there is a big flaw in that it violates the terms of service (TOS) of whatsapp.

Why My Whatsapp Number is Banned?

There are several reasons why an account might be blocked from using WhatsApp. Here are some possible reasons for the ban.

Using Modified Version of Whatsapp
Modified versions of WhatsApp break the Terms of Service (TOS), which prohibits the use of the messaging service. The ban can be either temporary or permanent, depending on the level of a policy violation.
Spamming on Whatsapp (Send Bulk Messages)
Your whatsapp number can also get banned if you are doing spam on whatsapp like you are sending unlimited messages on whatsapp groups or on unknown numbers which are not added in your contact list.
Selling illegal Products & Services
If you are a businessman and doing business online then you must be aware of the terms of service of whatsapp because if you are selling illegal products and services like weapons, drugs, etc then your whatsapp number might be get banned.
Spreading Fake News
You also get banned on whatsapp if you are spreading fake news. Whatsapp can take strict action against your account if you are spreading fake news.
Hate Speech, Spreading Sarcasm, Harsh Comments
Whatsapp has a powerful algorithm to detect hate speech, harsh conversion, etc. If you are doing such types of things on whatsapp then soon you will get banned from whatsapp.
Trying to Send Malware or Malicious Files
If you are trying to hack someone’s account or conversion by sending malware or malicious files then you are not on the right path because you cannot beat whatsapp algorithm and soon your number will be blocked on whatsapp.
Getting Reported by Users
If your whatsapp number has been blocked on whatsapp and thinking that I can’t ever before violating terms of service then your number are getting reported by multiple whatsapp users.

What types of Ban Imposed by Whatsapp

Any of the above reasons/lists can be entered to block the user on whatsapp and using the modified version of WhatsApp is the most common reason for the above. There are two types of bans on WhatsApp.

If you have a temporary ban on your WhatsApp number, your case is less serious and you will be able to easily / quickly remove the ban on WhatsApp from unrestricted WhatsApp.

The temporary ban can last anywhere from a few hours to a few days. This type of restriction is usually imposed to warn users to evaluate their mistakes. This is prohibited if you use modes, send bulk messages, get blocked, create groups with unknown contacts, and other common errors that can be corrected.

This is a long-term ban by Whatsapp. This is not an easy restriction to recover from. Generally, Whatsapp is banned permanently, if you are sending bulk messages, spreading fake news, sharing child abuse messages, and selling illegal products and services even after several temporary bans.

But if your WhatsApp number is permanently blocked then you don’t need to worry either, because we will provide you with a permanent WhatsApp ban solution.

Note: The unlocking process may not work 100%, especially in the case of a permanent ban. WhatsApp may have a solid reason to keep your ban for life.

Now that you are aware of the possible reasons why your WhatsApp account has been locked, I would say that you are ready to know the situation even in case of a temporary and permanent lock. To try to solve.

Let’s see, then, how to unblock a blocked WhatsApp.

How to Activate a Blocked Whatsapp Number due to using Modified Whatsapp?

If you are temporarily banned from using modified whatsapp such as WA Plus, GBWhatsapp, etc., you just need to follow simple steps.

Also Read: How to Use WhatsApp on Laptop or PC Without Using Phone 2023

Note: You cannot lift the temporary ban without switching to the original WhatsApp because the timer will not start.

How to Unblock Whatsapp Number due to Sending Bulk Messages?

If you are banned because you have sent more messages than usual, this issue may be resolved.

Write an e-mail stating,
“I didn’t know TOS. My whatsapp number is also new to my contacts. But I sent these messages only for the welcome purpose. I beg you not to ban me.”

You can try any other message at your convenience.

Wait 48 hours until you register your number on WhatsApp. After trying to register for 48 hours, there is a good chance that your WhatsApp will be unlocked.

If you are blocked for reasons such as sending fake news, sharing unauthorized files, reporting, etc., chances are that you will be unlocked due to the extent of the violation. Send an email to the WhatsApp support team stating that you are not aware of your error or violation of WA policies. Also, apologize to WhatsApp for the mistake. You can access your WhatsApp account again.

Now, this step will take some time, you will have to wait for the response from WhatsApp, and for that, you need to check your email inbox. WhatsApp typically takes 24 to 48 hours to respond.

If you are not on the Android platform or are experiencing an error in sending emails to WhatsApp, then here is a list of WhatsApp support email addresses for all platforms to which you can send emails with all the details. And remember, you can send emails in English.

Note – The process of terminating a permanently banned account on WhatsApp is entirely based on whether WhatsApp understands your innocence. If WhatsApp considers you innocent and wants to forget your mistake then what you had to do is your WhatsApp account will be unlocked and if not they will not unban you, in this case, You will have to wait a week or even a few months and then follow the same procedure to unban WhatsApp number.

How to Restore Your Whatsapp Data After Temporary Ban?

You can contact Whatsapp Support based on the device you are using. Already listed all email addresses according to your device like android, iPhone, windows phone, and others.

Secret Tips to Avoid Getting Banned on Whatsapp

People who belong to India, Nigeria, Pakistan, Bangladesh, and Nepal write to me from these countries, which makes me very happy. For that, I’ll start by thanking you. Towards the difficulty here, though, I’ve seen a similar problem with all of you. You get blocked when you call multiple contacts with the same message at once.

This can be great when you have a job, a school, or you own a store that reaches a large number of text users. In these counties, user privacy is sensitive, so if you’re setting up a workgroup or exchanging multiple photos and videos, I would recommend you not to use WhatsApp. A suitable alternative is a telegram.

Don’t fall prey to online services that claim to unlock your WhatsApp. There is no agency or online tool that can unban the banned WhatsApp. It is better to wait in case of a temporary ban and send mail in case of a permanent ban. I hope this post was helpful. Comment below for any help or assistance.

If you are banned on whatsapp, then you will receive the following message “Your phone number is banned from using WhatsApp. Contact support for help.” Whatsapp ban your number due to various reasons which we have described already in this article check out above.

Is WhatsApp banned in China?

Yes! Whatsapp is banned in China. China has its messaging app called QQ.

Is there any way to get unbanned from Whatsapp?

Yes why not, We have written in detail a guide, on how to get unbanned from whatsapp whether is a temporary ban or a permanent ban. Check out this post thoroughly.